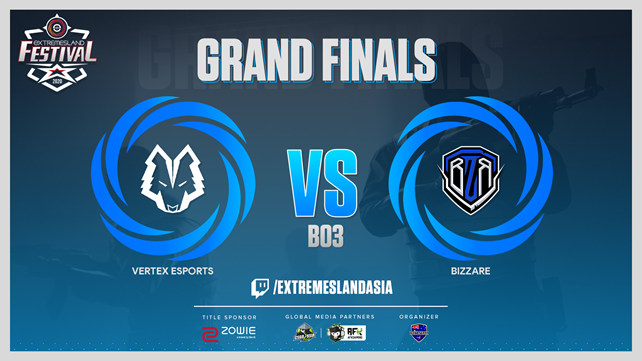 Bizarre, on the other hand, clinched their way to the grand final coming from the lower bracket. After being defeated by Team SYLYX (11-16) in their opening match, Bizarre went on to dominate the lower brackets, defeating teams like Animal Squad (19-16), Control Esports (16-9), and R!OT (16-11).

Bizarre’s Benson “Liki” Niuila has been named the Most Valuable Player (MVP) of the tournament by eXTREMESLAND Official. The 22-year-old capped off a fantastic individual tournament with an impressive 1.55 HLTV rating and averaging 1.03 kills per round in the first map against VERTEX.

Liki ended up on top in a quite tight MVP race, edging out VERTEX’s Jordan “pz” White who had a standout performance and was a strong MVP candidate throughout the event.

The final standings for the Oceania finals are as follows:

eXTREMESLAND was created by Shengcheng Trading Ltd. in 2016. It is a professional esports organization trying its hardest to promote esports with a positive and clean image to the public as its mission. Most importantly is to be honest to the game and its fans, producing a transparent, fair, and internationally recognized esports platform. eXTREMESLAND putting its feet on the pedal, to stimulate the growth of esports, and defend the stage of honor and dreams.