ZOWIE is proud to present the fourth edition of the eXTREMESLAND 2019 Asia CS:GO Open. As always, the goal of eXTREMESLAND this year was to provide the maximum opportunity for CS:GO in Asia. As such, we changed the format to accommodate more than 30 countries around the APAC region, and for the first time at an Asian CS:GO event, Turkey was included as part of the region. Sixteen teams from around APAC have been determined after months of national and regional qualifiers.

Last year's eXTREMESLAND event wasn’t without drama, and we all cannot forget the infamous incidents that transpired. But let us not dwell on the past, and instead, be thankful that the B5 platform, used once again this year, features one of the best anti-cheat systems around!

Shanghai is once again the host for eXTREMESLAND. The vibrant energy in this international metropolitan city is the ideal backdrop for the top teams in Asia to fight for their share of the US$100,000 prize!

A Quick Look at The Teams

The 2018 champions, MVP PK, took down UAE’s NASR in the grand final last year. The Korean’s will be making a return with a new roster and are set to defend their title. However, they will face some serious competition in order to triumph. Last year’s runners up are nowhere to be seen, having lost out in the Middle-East qualifier to Yalla Esports and Turkish team, Demise.

With the two representatives from the Middle-East region, and two from Oceania, there are also two strong contenders from China in the form of ViCi and TYLOO, considered perhaps the best teams in the Asia region right now.

Sadly, for the first time in eXTREMESLAND history, there will be no representatives from Malaysia or Indonesia. But South East Asia has two teams from Singapore - BOOT and LaZe, one from the Philippines - BREN, a Vietnamese team - GTV.Revolution, and the top team from Thailand - Alpha Red. The Oceanic teams, GroundZero and Genuine, are eager to show off their skills after having to replace the original qualifier winners due to external circumstances. South Asia is represented by Entity Gaming, widely considered the best team in India right now. They will surely be looking to lift their country out of the shadows of last year’s unfortunate events.

Lastly, let us not forget the team from Hong Kong - ENZO, Mongolia - AUGUST, as well as top Japanese squad Absolute, all of whom are considered the dark horses of this year’s event. Who will steal the trophy from MVP, and who will cause the biggest upset? In the end, all the teams will be looking to fight for their region, and fight for the title of eXTREMESLAND 2019 champions! The excitement begins this Thursday, November 14th 2019 so be sure to bookmark the streams, clear your schedules, and get ready for some awesome CS:GO!

Here are the groups for this year’s ZOWIE eXTREMESLAND Asia CS:GO Open 2019: 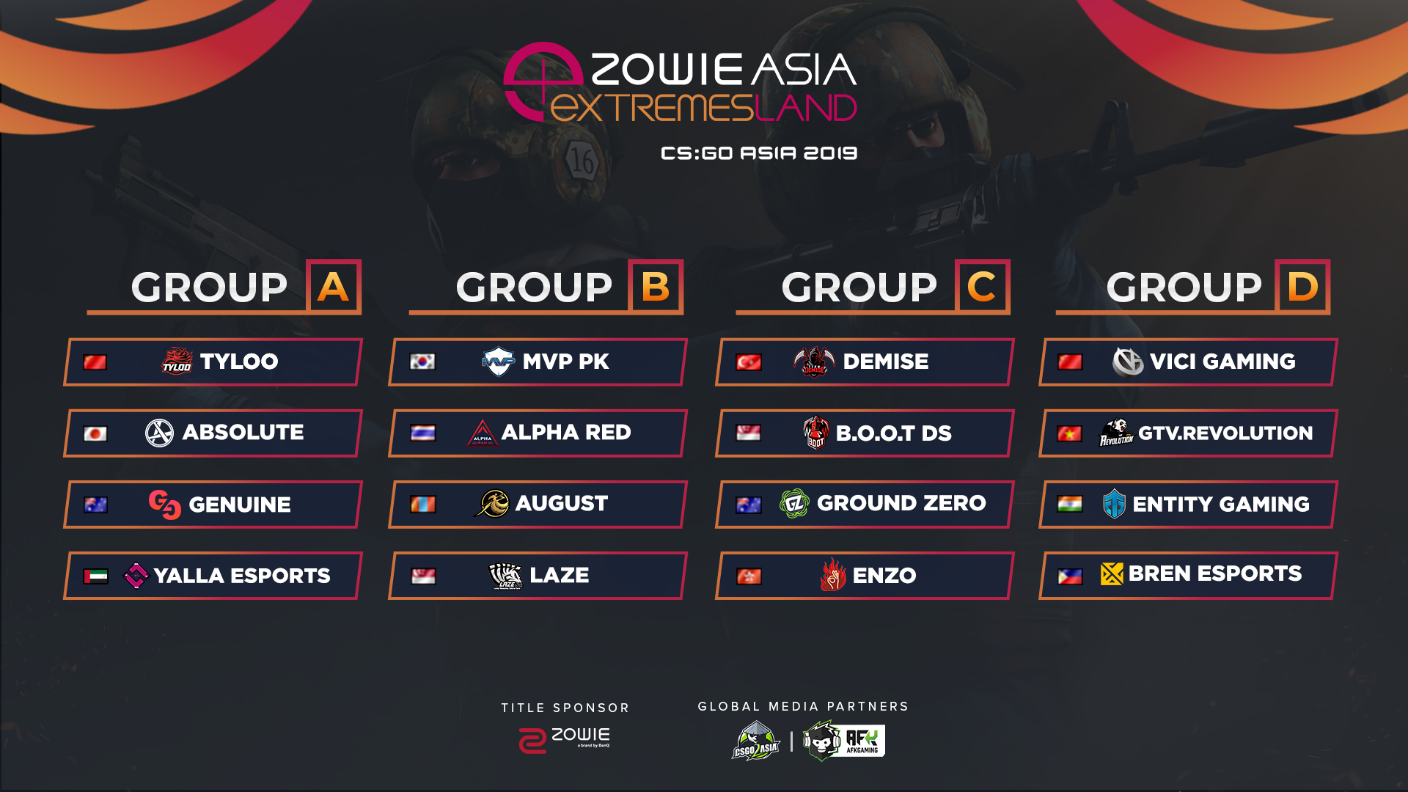 (All times in GMT+8 and subject to change)

You can watch all the games on the following official English channels.

Finally, we would like to thank our title sponsors, ZOWIE and B5 CSGO for making eXTREMESLAND 2019 a possibility once again. We would also like to thank all our venue partners, national and regional qualifier partners, and media partners for the continued support. This year’s eXTREMESLAND is set to be one of the most exciting yet, and we can’t wait for you to join us!

See you in Shanghai!